The intersection  of Jewyness and Lego is pure win. Why?

LEGO doesn’t “do” Jewish. By default, anything Jewy we make out of Lego is a hack, i.e. creative modification: two words that are so Lego to begin with. Add to this the gentle frisson of repurposing an iconic toy to represent components of our an-iconic religious tradition. When we build Jewish Lego, we convert the world’s best construction toy to Judaism.

Lego makes me happy because I love to build, I love to build with my kids, I love to build things that make Jewish holidays more fun and hands-on, and I love that my core brick collection is from my own childhood, back when two big boxes from Service Merchandise appeared under the Christmas tree, circa 1974.  This last reason indicates the source of that gentle frisson mentioned above. The irony is delicious, but the link to my childhood is still just that: a link, a bridge to who I was and who I am now.

I’ve designed Lego mezuzahs, menorahs, dreidels, a Duplo Temple as a set to enact the Hanukkah story, and holiday vignettes galore, but I’ve only just begun. See some of them below.

I’ve also used Lego to teach Hebrew. For a kid to re-create a letter or word with modular components of varying sizes and shapes is some serious learning. And what a cool way to remember the differences in look-alike letters, say, the dalet and the resh: the dalet needs an extra brick up there, but the resh doesn’t. (Tip: use a block letter chart to model from, rather than a siddur-style font.) 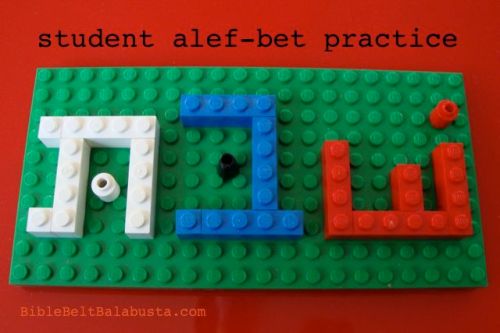 How about the rest of the world’s Jewish Lego efforts?  So far, there is no site devoted to the building or the indexing of such. I’d love to see a snazzy photo blog that allowed users to upload pics.  GodBricks does an amazing job keeping track of religious-themed Lego creations, but it encompasses all religions (even ancient ones!).

Chabad deals with Lego at highly visible menorah builds and public menorah lightings.  As befits talented missionaries, they know how to use irresistible materials as outreach. 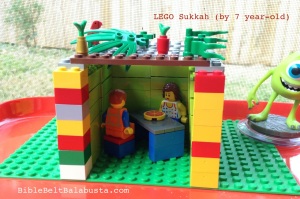 LEGO sukkah by a 7 year-old

Various dedicated AFOL (adult fans of Lego) have made stop-action films with Lego minifigures re-enacting Jewish holidays, events and real films. The Brick Bible interprets most of the “Old Testament” (not our term, y’all) in minifigs, which means the subject matter is arguably Jewish, but the authorship of this visual midrash—from a self-appointed atheist Reverend— ain’t. Here is a good time to mention that the definition of what makes any Jewish art “Jewish” is a topic of hot and ongoing debate.  Is the 17 year-old who assembled the lovely Lego Solomon’s Temple Jewish? I don’t think so, but the Temple is, and maybe a brick version is, too.

On a smaller scale, adults and kids make dreidels and menorahs out of Lego every year, as is proven by a quick online search.  It makes sense that the most visible Jewish holiday is also the one most often kitted out with Lego.

Here are links to some of my Lego work. The pictures aren’t fabulous, but I present them as inspiration for what you and your kid might create. I’ve also done some quickie vignettes so the minifigs can celebrate Jewish holidays. Type “Lego” in my Search Box in the sidebar anytime to find these and others.

* Lego Seder Plates for humans (not the minifigs)

* Lego Menorah made from 9 minifigures

* Lego Menorah (with candles, and a mini version with pegs) 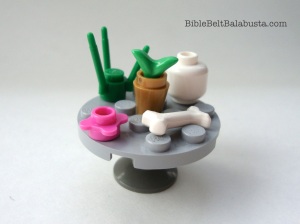 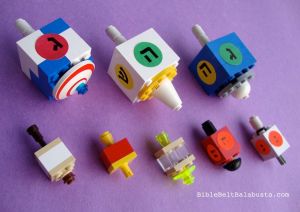 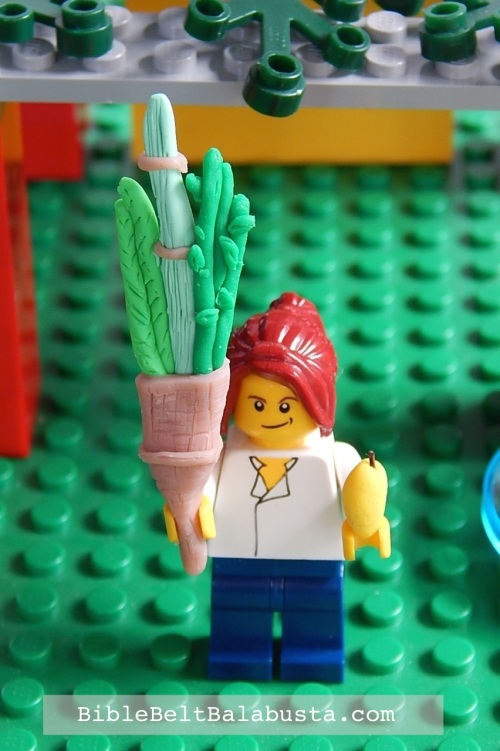