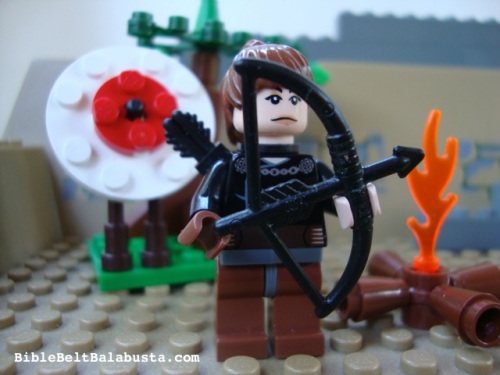 Happy Lag B’Omer, the 33rd day of the counting of the Omer, those 49 days between Passover and Shavuot.  In honor of the day, my family will be as thematic as is convenient: one of us will get a haircut (the one who is  satisfied with a quickie trip to the walk-in salon), we’ll burn some brush in the crumbling barbecue pit, roast stale Passover marshmallows and shoot a few arrows.  The arrows will be made of foam, after an incident that once put a hole through a solidly-built garden chair and very nearly put a hole through me.

We’ve already been fiddling with the LEGO.  For this year’s Passover seder afikomen treasure hunt—always an elaborate affair—one of the guests was a Hunger Games fan.  I hid her clue in a minifig rigged to look like Katniss with bow and arrow.  After the seder, I put Katniss in storage for a Lag B’Omer vignette.  What with Real Life and all, I nearly forgot.  But lo, this morning, I read Marjorie Ingall’s Tablet article about Lag B’Omer and Katniss and feminism and the potentially transformative powers of a bow and arrow. Suddenly, my minifig and her Lag B’Omer bow and arrow needed to surface, to join the virtual cache as one more girl-power image.  So, here she is, above, and with a traditional holiday bonfire.

Here, too is a more traditional scene with two kids roasting said stale Passover marshmallows on sticks (two LEGO Technic half-bushings on Harry Potter wands, if you must know). 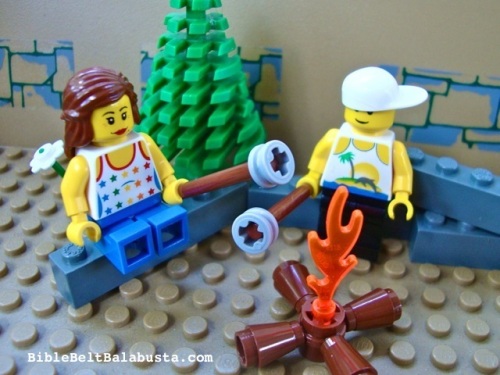 Lag B’Omer or Lag Ba’Omer: either way you spell it, it’s better with marshmallows

Well, I thought they were two kids.  A closer look—one without my oxymoronic  “progressive lenses”—reveals crow’s feet on the female face, plus the more obvious eyelashes and lipstick.  Make of the couple what you will.  It could be me and my younger kid, although I haven’t worn mascara since 1994 and you won’t catch either of us in tank tops, ever. 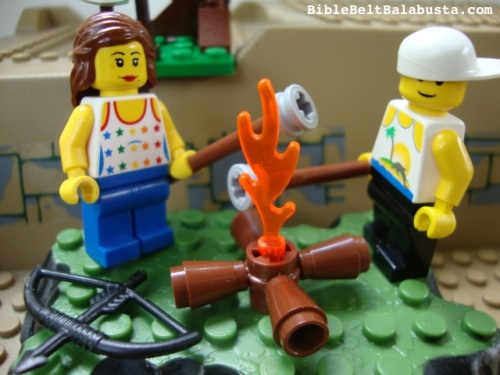 This entry was posted in Lag B'Omer and tagged Lego. Bookmark the permalink.