Shavuot Snack-tivity: Ice-Cream in a bag 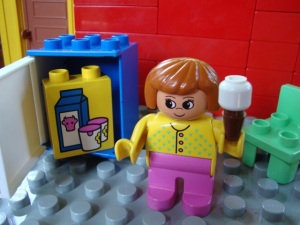 Who wants to make messy, homemade ice cream for Shavuot?  I do.  It’s the one time a year my family makes ice cream, so right there it’s a highlight of the Jewish calendar. “The Giving of the Torah,”of course, is at the core of Shavuot, but “The Making of the Ice Cream” is a bit more memorable if you are five.

If you don’t have a proper ice cream maker—and I don’t—the kids can make it with Ziploc bags.  Even if you do have a machine, the low-tech baggie way is a good, gloppy group activity.

WHY:  Why do Jews do dairy for Shavuot?  The Talmud tells us the wandering Israelites, Torah now in hand—including the new, wacky laws of kashrut— don’t have what to kasher with, so they avoid meat for the meantime.*  It’s like my house when Uncle Kenny comes to visit: we switch to dairy and paper plates.

And then there is the poetic explanation: “The Torah is like milk and honey.” The honey referenced is made from dates, not honeybees.  Mmmmmm, dates.  I gain 5 pounds every Tu B’Shevat on the dates alone. Palm dates are one of the biblical Seven Species of the Land of Israel, and thus deliciously thematic for Shavuot sweets.

HOW: The easiest Ice Cream in a Bag recipe seems to be the one at FamilyFun.com, at this link with a short video.  Basically, you mix sugar, half-and-half and vanilla in a pint ziploc bag and seal it.  Plop that into a gallon ziploc of ice cubes and Kosher salt. Massage for five minutes. Glidah!*

Their advice: to give each person a bag to shake, and then to eat straight out of the bag.  Because the portion sizes are small (or “sensible”), I agree each kid should get a personal set of bags (outer and inner).  To eat ice cream out of a baggie saves clean-up and might be fun for kids, but it grosses me out just a wee bit.  It pushes some sort of sensory defensiveness button, I guess.  I prefer to snip a bottom corner of the inner bag and squeeze the ice cream into a proper dish.  We’ve all improvised a pastry bag this way, right? But whether in a bag or in a bowl, work fast: this stuff melts as soon as it makes.

Notes: Get the toppings ready first.  Use tape to seal both ziplocs if you are working with energetic children or klutzy PhDs (redundant in both cases).  Burp the air out of the bags before sealing.  It can take 5 to 15 minutes of earnest smooshing, massaging, and constant hands-on contact to transform liquid into semi-solid, so provide oven mitts or a kitchen towel or winter gloves to keep hands from going numb. Wipe the bag before you open it, or you’ll get salt-flavored ice cream.
Group/Party/Class Notes: Doing this with a bunch of kids?  Decide whether to mix ingredients in a big container and then dole portions to individual bags, or to let each kid measure his/her own ingredients.

The Ice Cream in a Can version is identical to the bag recipe, but with cans.  I am a hoarder by nature and nurture, and even I don’t have two sizes of lidded cans lying about.  At Passover, I purposely put away the empty Manishewitz macaroon can for future Shavuot ice cream, but now I don’t have a second can to go inside it or around it.  A frosting tub would work, but I used all those for tzedakah boxes at shul.  Recipes call for coffee cans. Does coffee still come in cans?  I’m a tea drinker, but last time I looked at coffee, it was in vacuum-packed bags. Oh, wait. Suddenly, I’m envisioning an ice-filled Utz cheese ball container rolling across the lawn….one of those massive ones.  Now that, I can manage.

Hey, have you seen those ball-shaped ice cream makers? Freeze and Play: you fill it, seal it, and gently kick it round the yard.  I covet them on a yearly basis, but cannot justify buying something I’ll have to stow in the shed for 364 days. Even a hoarder has limits.

Shavuot is Dairy-centric, but what about the vegans or lactose-intolerant among us?  I found recipes that substitute almond milk, coconut milk, soy milk, and rice milk before I stopped looking.  I put a few links below, but I suspect a zillion hits will pop up if you search with terms like make ice cream without machine vegan.

I mention the The Seven Species because, irrationally, I still think I have to rationalize the making of ice cream to celebrate this holiday. Plus, I tend toward the overly-thematic.  But even I don’t want to take the time to plug all the Shevat ha-Minim as per Deuteronomy 8:8: wheat, barley, grapes (raisins), figs, pomegranate, dates and olives into ice cream.  With my Edible Mt. Sinai snack-tivity (muffins), yes, or a Shavuot cake or other baked goodie, of course, as long as the olives were in oil form.  Luckily, Shavuot gives us at least two meals for dessert opportunities, plus an all-night study session.  Plenty of time to squeeze in dairy, the Seven, and even edible flowers while we’re at it (flowers are another Shavuot theme).

If you have a favorite non-machine ice cream recipe, technique, tip or gripe, holler.

Why do Jews eat dairy on Shavuot? from About.com

Ice Cream in a bag, with video, from FamilyFun.com

Steve Spangler Science: Homemade Ice Cream (he combines the bag method with the can method, which I rather like, via a fun science experiment.)

Making Ice Cream in bags, in freezer, and in cans

Vegan ice cream without a machine

NOTES
*Technically, the Tablets were in hand, but by extension and by tradition, it was the whole Torah. (As opposed to the whole megillah.)
*Glidah is ice cream in Hebrew. Apparently, it’s a neologism courtesy of Eliezar Ben Yehuda, based on an ancient Aramaic word for ice or frost. See the article in the Jewish Chronicle Online, here.

This entry was posted in Shavuot and tagged edible flowers. Bookmark the permalink.

4 responses to “Shavuot Snack-tivity: Ice-Cream in a bag”