Instant upcycle for the miniscule percentage of folks for whom both statements apply:

I don’t eat snails, but I happen to own two plates that would indicate I at least serve them. Actually, they were mine before I knew what they were.

On Date Night, my husband and I dropped by Goodwill (as one does). We found these two little dishes, and of course they screamed SEDER PLATE. Six circular indentions? Perfect! 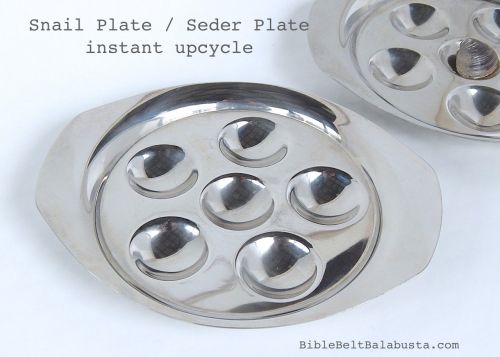 The checkout lady asked us what they were and we admitted we had no idea. Conversation could have stopped there, but she looked game, so I told her I was going to use them as seder plates “for the Jewish holiday of Passover,” and that each little dent would hold one of the symbolic foods, “like the egg and the shank bone.”

“Honey, bless your heart, that is fascinating. You come back and show me a picture, okay?”

I took these photos for the nice lady, but I offer the idea to anyone whose Jewish life intersects with escargot platters and whose sensibilities are not averse to tiny portions or former trayfe.

Kashrut:
Snails aren’t kosher, but these dishes were NWL (new with label) and so were kosher enough for me. I converted them to Judaism, as is my custom.

IF I had Amercian Girl dolls, these would be an ideal size for AG seders. But honestly, American Girl dolls creep me out more than does the prospect of eating snails, which is saying something.

Symbol Placement: See my post about Seder Plate Symbols: Where They Go.

Oh, and see my Hub Cap seder plate, another unconventional and instant upcycle for Pesach.

This entry was posted in Crafts, Kitsch, Passover and tagged upcycle. Bookmark the permalink.