For our school’s big Walk Through The Steps Of The Seder program, I wanted a way for kids to really GET the meaning of the word Passover. You know, when the 10th plague Passed-Over the houses of the Israelites who had followed directions and painted doorpost and lintel with lamb’s blood? PassOver.*

First, I set up a Playmobil version: my wee Egyptian house plus Playmobil bucket full of red tempera with a QTip for kids to daub around the open doorway. Cute, but small. I wanted BIG.
And then I remembered my refrigerator box in the storeroom. All it needed was a door cut and the outside painted . . . 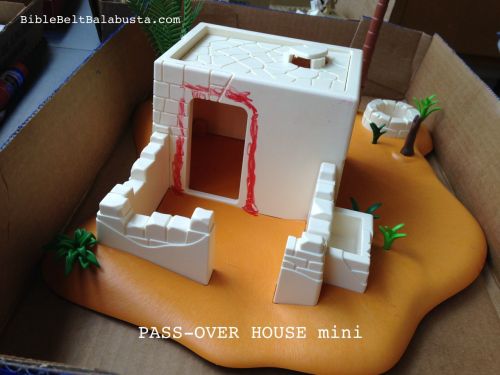 doorposts and lintels for tabletop tableau

I know this will work because when I asked the building supervisor for leftover house paint for the fridge box and he said, “what color?” and I answered, “whatever contrasts nicely with blood,” the ensuing conversation was a case in point. All I had to say was, “Remember when the 10th plague Passed-Over the houses of the Israelites who had followed directions…”  It was as if a cartoon light bulb went on over his head: “OH! Is THAT what that means? I never realized it.”

My hope is that the same lightbulb will appear over every student’s head—K through high school—as they slather the Refrigerator Box House doorpost and lintel (if they can reach the lintel) with fake lamb’s blood. 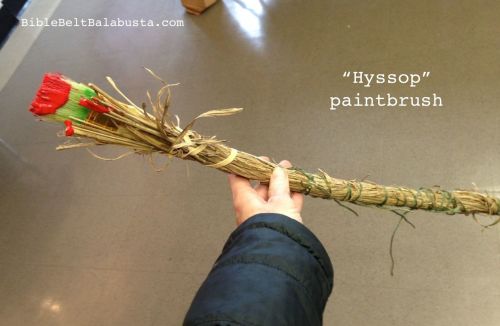 But wait, what about an actual representation of the Passing Over?
YES. Read on:

My Rabbi walked by my assembly area this week and I showed off some of my seder step stations and, of course, the House. I told him I’d wanted to rig a double pulley system to make something Pass Over the house every time a kid painted, but that I had run out of time. His solution was brilliant and simple and do-able: put a teenager on each side of the house and when a kid paints, the teenagers Pass something spooky Over to each other. CREEPY! MEMORABLE!

What to toss? I envisioned a diaphanous, black veil that could float over, but then I envisioned it falling short and landing in the paint. So, I made a giant black felt beanbag. Beanbags are easier to lob with precision.

My bag represents Makat BeChorot, Plague of the Firstborn, and I could have decorated it with those words (for the older Hebrew students) or with the Hebrew word for death (mem, vav, tav),  or with a sad face (for all ages), but I ended up adding a big “#10.”
I’m waiting for a kid to ask what the “hashtag ten” means . . .

the 10th plague: what we pass over the house

I thought about making a white skull and crossbones, but did not want to confuse the Impressionables with pirate associations. Let’s keep the creepiness CRYSTAL CLEAR.

I also thought about making the bag green as a tribute to the Charleton Heston version of the angel of death—like swamp gas but in craft felt—but was outvoted.

And speaking of creepiness, I hope I don’t get hate mail for this project. I get hate mail for the way I “trivialize” the 10 plagues and for my edible sacrifice in the edible Mishkan (red decorating gel oozing from the jugular of a cracker cow on a sandwich wafer altar).

I can deal with that, but what I can’t deal with is any evil wacko weirdness with Jews and blood: historical (and current) antisemitic fantasies of blood libel and ritual murder and all that mishugas. I hesitate to post another story about blood, even if it is washable tempera.
But here it is.
I can’t let the Vacation Bible Schoolers have all the fun, now can I?

The thought of Vacation Bible School reminds me: have you seen the hilarious blood-on-the-doorpost thumbprint craft-foam kits at Oriental Trading? Sometimes the lines between BibleBeltBalabusta and VBS are very, very fine. Although, let’s remember, the VBS lamb is Jesus, and my lamb is a lamb. BIG difference. And as I just said, let’s keep the creepiness CRYSTAL CLEAR.

HOW TO MAKE A PASSOVER HOUSE:
HOUSE: Fellow teachers and I painted the fridge box with acrylic house paint in a convincing sand color. The door is cut so that two doorposts are available for swabbing (as opposed the hinge at the box corner, which would leave but one doorpost).
I added a rope doorknob (after I took the pic) to facilitate the inevitable goings and comings.

BRANCH: My hyssop branch is a wad of dried ornamental grasses from my herbaceous border (I love that phrase) tied in a bundle and plugged at one end with a partially concealed paint brush. Early tests revealed the poor paint coverage afforded by wadded grass stalks alone.

BLOOD: Lamb’s blood. Just keep repeating “lamb’s blood” so the Impressionables don’t think it is human blood. Lamb’s blood can be any washable red paint you already have. Some washable paint is more washable than others. Poster paint dries the fastest of this group, but is often the least washable. Offer smocks if you or your Impressionables are tidy.
If you are super dedooper tidy, my advice is to use one of those poster paint applicators (like a preschool dot-to-dot applicator). It dries the fastest.
Then again, if you are super dedooper tidy, you will not attempt a Passover House at all. You will buy the made-in-China cookie-cutter kits to which I allude above.

DEATH: My version is two sheets of craft felt hot glued at the perimeter after I stuffed it with a ziploc of dried macaroni. Chametz!

DETAILS:
MESS: Stick a tarp under the house and pile a mountain of towels at the ready, plus baby wipes. One brush means one user at a time. Do not make more than one hyssop brush.

SIGNAGE: Without the printed verses for kids to see / read / hear, this object lesson is just an object. I printed Exodus 12:13 in English and Hebrew, with the words for Pass Over in red ink on both, so kids could compare.*

MIDRASH OPTION: my Director wanted to display Rashi’s commentary about the Israelites painting the inside rather than the outside of the doors. She wanted the older kids to have to decide which to do: paint in or out. I love the lesson, but practically speaking, I am a little worried about having wet paint inside and outside this cardboard house because 1) it might soak in and the house will crumble and 2) kids will get paint on themselves when they go in and out the not very efficient and now very wet door. We’ll see…

PRINTING THE HEBREW: Note that when you print Hebrew verses from some sites, the name of God might be represented as the tetragrammaton, which will qualify your lowly inkjet paper as Geniza material when you are done. Easier to find a translation that uses a kosher abbreviation like a double vav. If you find one, tell me. I made Geniza material.

HERBACEOUS TRIVIA:
What the heck is hyssop? See what The Forward’s Philologos had to say about that, here.

This entry was posted in Activity, Crafts, Passover. Bookmark the permalink.