LEGO Moses on the Mountain 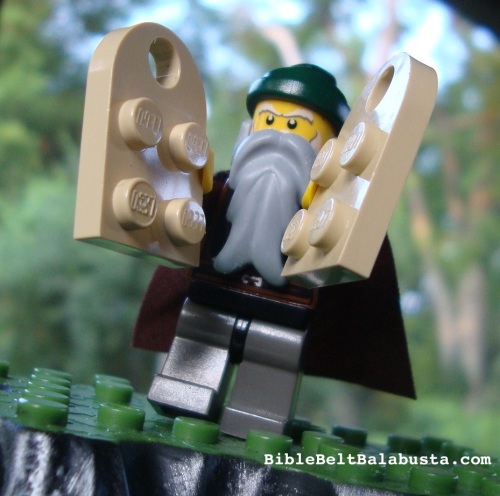 Moses and the Lego Tablets

Google “Lego Moses” and you’ll get beaucoup hits. But just because he’s been done, doesn’t mean I can’t have a go. This one is in honor of Shavuot.

My Moses wears a do-rag because it is not cool to meet an omnipotent Divinity atop a mountain with your head uncovered. Nowadays, you can’t walk into a synagogue without putting something modest on your keppe, and the tradition had to start somewhere.  Besides, it was sunny in the Wilderness.

What I really wanted was a Lego way to incorporate the famous rays of light Moses radiated after the Big Meeting (Exodus 34:29). Thanks to a glitch in translation from Hebrew to Latin (#Saint Jerome) those rays are depicted as horns in countless artworks, and are, in part, the root of the persistent idea that all Jews have actual horns. 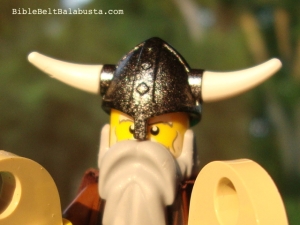 At first, I gave my Moses a Viking helmet, but it looked Wagnerian, and to conflate Wagner with Judaism’s biggest prophet is far too risky.  (see Wagner and the Jews)

Ideally, I would remove the Viking horns and insert a tiny LED light. Teensy rays could then emanate from the holes and stun onlooking Israelites.  However, this arrangement is beyond my current capabilities.  A girl can dream.

The Lego Ten Commandment Tablets were originally meant to be vehicle hitches (Lego part #3176, plate, modified, 3 x 2 with hole). I’d seen them used with Moses years ago in the book Brick Testament: The Ten Commandments (link).

For those of us who enjoy Lego exegesis, take a peep at a page of Lego Moses figures in Google Images.  Artistic choices can be revealing: skin color, facial expression, hair style, head-covering (or not), clothing, action. I purposely gave mine a unibrow, as a sort of wink to stereotype. A kosher Moses will always have a head-covering (by the way, my do-rag is green because my only other one is red, and red is too Pirates of the Caribbean.) I kept the generic yellow skin tone because I would like to believe Lego yellow is without race, although just typing this sentence underscores its inanity.
It is so not kosher to depict God as a figure (such as in this pic from the Brick Testament), and honestly, it isn’t kosher to depict Moses, either.  I could go on, but I have much to do today, and it is time to put away childish things.  For the moment.

DIY: If you’d like to order a bunch of these nifty Lego plates so your kid or classroom can make Moses carry them up Lego mountains, more power to you.  I ordered mine from BrickLink, and at that moment they were available in tan, gray, white and black.

For a gentle intro to the horn / ray of light thing, see this article at MyJewishLearning.com.

For more about official Lego sets and religion, again see GodBricks, but here.

For more about Wagner and the Jews, start here.

This entry was posted in Shavuot, Simchat Torah and tagged Lego, Moses. Bookmark the permalink.