“Why We Celebrate Passover:” book review

Looking for one Passover picture book that tells the story of Passover without scaring the Underoos off a kid?  One book that describes basic Passover customs and assumes no prior knowledge?  And a book with attractive artwork, rhythmic text and not too many words on a page?

Here it is: Why We Celebrate Passover, written and illustrated by Howard M. Kurtz (Pigment & Hue, Ages 3-8, paperback, 24 pages).  Not sold at Amazon or B&N or IndieBound, but found at Nice Jewish Retailers like ChaiKids.com, OyToys.com and ModernTribe.com.

I’ve used it with family groups, classrooms of nonJewish kids (at Passover Parent school visits) and at home, and it readily serves a wide range of ages and backgrounds.

The book combines the Passover Story with a brief overview of how Jews celebrate the holiday. It  begins with a page or two of Joseph’s story, which gives the traditional reason why the Israelites are in Egypt in the first place (Joseph’s family went to Egypt for food, stayed, multiplied).  The story skips to baby Moses, then a “full-grown” Moses who approaches the Pharaoh “on behalf of the Jews,” on up through the miracle of freedom via the Sea of Reeds.  All is told in simple rhyme and with bold, graphic illustrations easy to show to a classroom of listening kids.

Here’s a sample of the text. One couplet per page, which is ideal for read-alouds:

…He demanded, “Let my people go and be free.” But Pharaoh refused, so ten plagues there would be.

Blood filled the river, and frogs leapt around. Then lice, pests and hail pellets fell to the ground.

The Jews left so quickly, it was no surprise: the bread they were baking had no time to rise.

This excerpts show how the author handles the plagues, which can be tricky with young kids. “Five more plagues later” glosses over the whole Death of the Firstborn issue.  What’s important is that there were 10 bad things sent down upon the Egyptians, and that they changed Pharaoh’s mind.  Parents and teachers who want to introduce or explore all ten plagues can find that material elsewhere.

Another Big Idea succinctly stated in the excerpt above is the “no time to rise” theme.  This explains the custom of eating matzah during Passover.

“So now at the Seder, we tell this great story, to remember the miracles, courage and glory.”

It continues with seven pages—in the same word/picture ratio—of Passover observance: “let all who are hungry,” the seder plate, the four cups of wine, the four questions, and a final page with the biggest Big Idea: “We celebrate Passover: now we are free!” 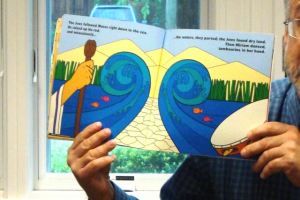 "...the waters they parted; the Jews found dry land. Then Miriam danced, tambourine in her hand."

Note that the author uses the word “Jews” to describe a people whom at the time would be Israelites or Children of Israel or Hebrews.  Jews weren’t called Jews until the Romans invented the name (from the Kingdom of Judea).  But this purposeful anachronism keeps the personnel clear for kids, for whom “Children of Israel” can have a range of meanings or no meaning at all. Kids can make the connection between Moses’ people and themselves (or their classmates), all the same people.  And besides, “Jews” scans better in the rhyming text.

The front cover packs a big punch: all four cups of wine, three matzot, and a seder plate with Hebrew (and vowels) and English.  At a glance, the main symbols of the holiday.  I’ve used that picture as a guide for seder plate crafts, by the way, because the graphics make the symbols crystal clear.

Here’s the author/publisher’s site: Pigment & Hue.  They also make a plastic kid’s kiddush cup and some cute Passover melamine dishes.  The Passover set uses the seder plate graphic from the cover of Why We Celebrate Passover.  Even though it’s marketed as a child’s dish, it would make a great seder plate.  ChaiKids sells them, as does OyToys.com.

This entry was posted in Jewish kids in nonJewish school, Passover and tagged book, book review. Bookmark the permalink.

One response to ““Why We Celebrate Passover:” book review”