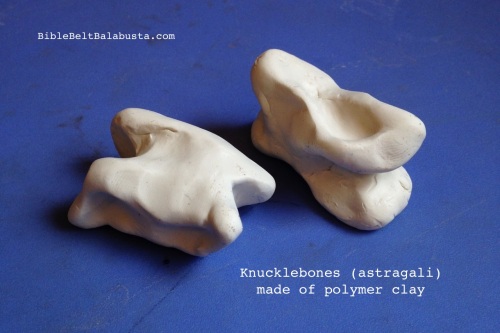 two of my polymer knucklebones for casting lots

Happy Lots! Pur = lot, Purim = lots. That’s “lots” as in what Haman cast or threw to determine the date upon which to kill the kingdom’s Jews. In the Megillah, the lots indicated Adar 14, and thus we eat Haman’s hat / pocket / ear (depending on your translation) on that date ever after.

To help make the name of this holiday and the whole idea about “casting lots” a bit more hands-on and memorable, I wanted students to explore the kind of lots Haman might have used. I wanted knucklebones.

Some scholars think that Haman used bones as divination tools—cleromancy—and perhaps used knucklebones, which aren’t knuckles at all but part of the hindlegs of hooved animals, in the tarsus (some say foreleg, inside the kneecap). Ancient cultures used them for games, gambling and fortune-telling, and many places still do, but not places around here.

In Nashville, such things are unheard of. The mainstream grocery butchers and the groovy, hipster butchers I’ve approached all think I’m nuts. My hope was that knucklebones just “happen” when a hooved animal is butchered, and I’d be doing butchers a favor by taking away the waste, but apparently this is not the case. Surgery may well be involved. I don’t know. They don’t know. I gave up. When I learn sheep anatomy and a second language (to use at our international markets), I may try again.

Knucklebones are precursors of jacks. Toss the bones (from flat on your knuckles) into the air, and however they land determines the score. Each bone has four distinct sides with traditional names and a number value. The photo below (from a company which makes molds and then casts the pieces in resin) shows the bone detail:

Until I can have real knucklebones, I will make do with homemade versions. I made several out of white polymer clay and baked them. They aren’t nearly as durable or irresistible as will be real ones, but they are fine for teaching about ancient pur.

My clay knucklebones were part of a Touch-Me display of games and tools of chance for our Purim Mitzvah Carnival. See my post about that display here.

Kids loved tossing my polymer clay versions so much, the pieces chipped. A lot. Lots. Maybe next year, I’ll have proper bones to throw. 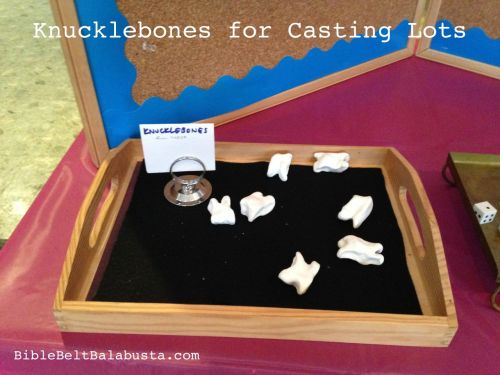 INFO:
Sources of reproduction Knucklebones: games shops and magic shops sell reproductions.
By the way, some pet stores carry dog-chews called knucklebones, but these seem to be giant cow leg joints that have been cut. Real knucklebones are not cut from a larger piece: they are complete and whole.

Also called huckle-bones. Also called chuko and a zillion other ethnic names for the game that everyone in the world—except us—seems to play.

This entry was posted in Activity, Purim. Bookmark the permalink.