As if I need more seder plates. I have so many each guest could have their own. Which reminds me of something I get asked every year: “it’s a plate, but we don’t eat or serve from it?”  Very confusing.  Seder plates just hold the symbolic foods so we can direct attention to each one when the haggadah tells us to.

For 2012, Target has a new design, same price. It has a white ground rather than royal blue, and the food pictures are a smidge smaller, but the substantive difference is the addition of transliteration: the conversion of Hebrew letters into the equivalent English letters.  For example, the detail of last year’s model (see above, right) shows the egg between the Hebrew  ביצה  and the English word “egg.”  This year, the transliteration “beitza” is smack under the Hebrew (see left, above). Now, anyone who can read English can pronounce the Hebrew name of the symbolic foods, even if they don’t know aleph from tav.  Very friendly, don’t you think? 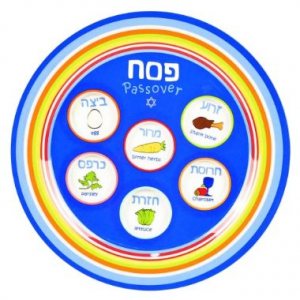 Transliterated Hebrew irks some teachers, but I welcome any opportunity for learners to access the language.  Take the symbol karpas.  Lots of us know from karpas: it’s the spring vegetable usually represented by parsley or a potato.  We might not recognize the Hebrew spelling, or recall it if asked to write it down, but if the Hebrew spelling is next to “karpas,” which is next to a picture and the word “vegetable,” we know what it says. If we see this combination again and again, karpas becomes a word we recognize in Hebrew.

Another groovy thing about the Target seder plate is that, unlike my Spode version, which I store in tissue paper and bubble wrap, it is kid-proof. Melamine is not an earth-friendly material, granted, but it makes a great seder plate for kids to use.  A child who helps prepare the symbols and then figures out where to put them on the plate is a child who gets a concrete, hands-on connection to the holiday.  At my house, when its time to hold up or point to the symbols, the kids who put them there pay attention and feel rather proud.  They might spend the rest of the evening under the table flipping rubber frogs at each other, but by golly they heard and saw “their” seder symbols play a starring role. 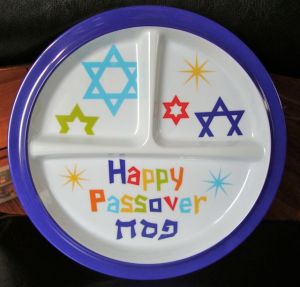 Target 2012 Toddler plate. Bought one, and I don't even have a toddler.

So far, these dishes are not online at Target.com.  Since they are here in my Nashville store, I figure they’ll be in other areas not noted for a critical mass of Jews.  I mean, they’ll be in other areas without a dense Jewish population. What? Where Jews are not critical or dense?  What I mean is that we don’t have tons o’ Jews here, so I’m reckoning Target will sell these dishes in other places without tons o’ Jews.  Will you let me know on the Bible Belt Balabusta facebook page if you see these in your Target?  I’m curious.

This entry was posted in Passover and tagged Hebrew, seder plate. Bookmark the permalink.

9 responses to “Target seder plate for 2012: with friendly tweak”