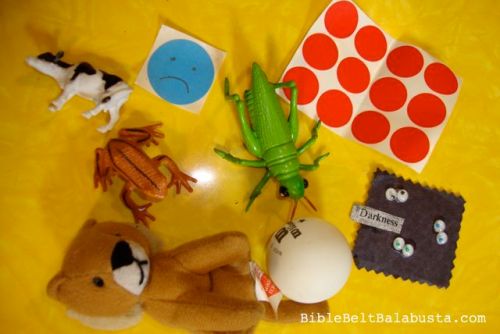 Everything about the seder is designed to teach kids. Symbolic foods, the four questions, songs, Rabbinic lessons and the many discrepancies therein: eating yet more matzah for dessert (afikomen), leaning on pillows at the table, all that dipping? But usually, seders are so long and boring not much learning goes on, except learning that seders are long and boring.

Re-enacting the plagues can make seders more educational and fun. We are commanded to think of ourselves as slaves in Egypt: toys, props and simple costumes facilitate this leap of the imagination.

You can make this as simple as pulling out a plague toy and holding it up as each plague is recited, or you can go all out and re-enact with a Moses, Pharaoh, Israelites and Ancient Egyptians.

But, you might wonder, should plagues be fun? I avoid Haman punching bags
and inflatable Pharoah hammers because they are mean-spirited and cruel, but the plagues are part of our Hagaddah, as is the built-in method to ensure we demonstrate compassion for those whom the plagues harmed. When we dip our fingers in the wine during the plagues recitation, we remove a drop of our own joy in remembrance of others’ pain. (This is why we aren’t supposed to lick our fingers, lest we end up drinking those drops meant to be wasted.)  By the way, arguing whether or not we should be happy at the downfall of our enemies is an incredibly appropriate topic for discussion at the seder table: joys of justice vs. restraints of revenge.

Let’s get on with the toys. Several ready-made kits are available, some more creative than others, but your kid can easily assemble her own before Passover, as well as make a few extras for guests. Finding a representation of each of the ten plagues somewhere in the house, from stuff you already have, feels like a treasure-hunt—in effect, a B’dikat Makkot—and is an educational enterprise in itself.  How best, for example, to symbolize darkness? Boils? Frogs are easy, as are cows and locusts and pests, but what about the super spooky Death of the Firstborn?

Here are some suggestions, ready to adapt according to the age of your child.

Put everything (except the food coloring, see below) in a small box or tray, along with a list of the plagues in Haggadah order, with pictures for pre-readers. Photocopy a list from an illustrated Haggadah, or an older child can make his own. This way, kids can easily find each plague as it is recited and hold it up or, if allowed, throw at a designated Pharaoh.

See my post about making a plague box from an empty matzah box, here.

If the idea of throwing anything at the dinner table is appalling, move the plagues portion to a safer area. At our house, Egypt is the living room: here is where we choose costumes (scarves, bathrobes, white sheets) and become Israelite slaves or Ancient Egyptians. Presence of “mizrim” themselves is crucial during the Boils plague. The sticky red dots must be applied to someone… Guests can assume roles of the key players in the Exodus story, or have non-speaking supportive roles. Remember, Moses is never named in a traditional Haggadah, so a mini Exodus dramatization can mean the difference between your kid grasping the actual personnel of the story or not.

Even a very young child can be Moses, memorizing a single line: “let my people go!” Pharoah’s response is even less grueling to commit to memory: “No” (until the tenth plague, when “OK” will do). And Pharoah can steal the stage when he or she commands a slave to pour that special glass of water from the Nile…

Plague number one: the blood plague is, I admit, my favorite, perhaps because of the indelible memory of my own children’s reactions. Here is how to do it so your guests (of any age) will never forget it:

Before the seder, put three drops of red food coloring in the bottom of a tall, clear drinking glass. Place this and a clear pitcher of water near the table where you will be conducting the plagues matchup. When time for the first plague, announce that you (or Pharaoh if you are role-playing) are thirsty and will have a refreshing drink from the River Nile. As the water from the clear pitcher is poured into you prepared glass, it will instantly turn blood red.

After the last plague, remind guests the finger-dipping demonstrates compassion for the Ancient Egyptians who suffered. Make a distinction between the Ancient people who enslaved our ancestors, and the modern Egyptians who are our friends (especially now, in their dramatic quest for political freedom). Children are easily confused about this point.

An extra touch: make a poster of Pharaoh for target practice during the plagues. Find an illustration of a Pharaoh in a Haggadah, storybook or online and photocopy it onto paper. Or draw your own. Tape it to a door and take aim. If you put your poster in a cheap plastic poster frame, it can double as a shield when your Pharaoh is dodging hail and frogs.

If you start this tradition, be warned: it can be addictive. I find myself searching for perfect little plagues toys year ‘round. After Hallowe’en, for example, I load up on clearance-priced stretchy skeletons and skull rings for the tenth plague. Plus, any of the toys make super prizes if you do an afikomen treasure hunt!