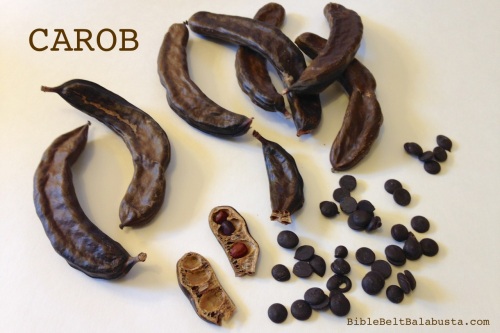 Carob pods and carob chips for a taste (and smell and sound and sight and touch) of Tu B’Shevat.

Carob is a biggie for Tu B’Shevat. It’s a tree fruit native to the Land of Israel, it’s de rigeur at a Tu B’Shevat seder, and it’s part of the story about Honi the circle-maker lots of us read aloud on Tu B’Shevat. Remember that story? Where mystical wise man Honi thinks it’s dopey to plant a carob seed because by the time it bears fruit—70 years, according to the Talmud—the person who planted it will be dead? A 70-year nap teaches this Jewish Rip van Winkle that we plant trees for our children’s children, just as our ancestors planted trees for us.

I always felt sorry for Honi, waking in a world that had moved on and that didn’t believe him, but the picture book and G-dcast versions tidy that up for us. By the way, the botanical truth of the carob tree is that it can bear fruit within 3-4 years from first bud, and can reach full and stable crop size by 20-25 years.* The Talmud changed it to 70 to prove a point.

Kids think carob pods are weird and stinky, but weird and stinky is at least memorable. All parts are edible, which is why they belong to the Briyah category—fruits that may be consumed in their entirety—in a full-on Safed-flavored Tu B’Shevat seder. Usually, kids think that processed carob chips smell and taste better than the pods/seeds, but it’s still important to show where the chips come from, and what actually hangs from the tree.

My former school director—now retired—grew up calling carob bokser in Yiddish, and she felt it just wasn’t Tu B’Shevat without a carob pod for show and tell. For years she kept a single, twisted pod from Israel in the storeroom, just loose among the stacks of paper plates and old files. We had to hunt for it every January. It rattled. It broke. It disappeared. It made me sad.

So, I went on eBay and found a sweet hippie selling “wild-crafted” carob pods in California. Same tree as the Mediterranean carob: Ceritonia siliqua. Hippie stated clearly that the pods were not from trees he owned, but having fallen onto the sidewalk were therefore fair game, and no one else seemed to care. I admired his honesty and bought a ziploc full. Plump, brown, fragrant, rattle-y. I keep them in an old pickle jar (with a fresh lid) so that they will never get lost in the storeroom or break or disappear. They make me happy.

Maybe you live where carob grows as an ornamental? Health food shops may have the pods, and they will certainly sell the processed chips.

Other fun carob facts: it was the chief food of the mystical rabbi Shimon bar Yochai when he hid in cave from the Romans (see Lag B’Omer) ; it is in the Talmud; and while it isn’t explicitly mentioned in the Tanakh, there is speculation that carob might have been the manna in the wilderness and might also be part of Psalm 81:16’s “honey in the rock.” Also, carob seeds are what have given us “carat” weight for gold and gemstones.

LINKS:  (For online searches, note that Honi is sometimes spelled Choni in English. Starts with a chet.)

G-dcast video of the Honi story.

Lovely article about Honi and carob from the Velveteen Rabbi.

Picture book about Honi and the carob tree:
Honi’s Circle of Trees, by Phillis Gershator, illustrated by Mim Green (1995)
Here’s a page with some pictures from the book.

Is this really the only picture book about Honi?  Please tell me if you know of others. 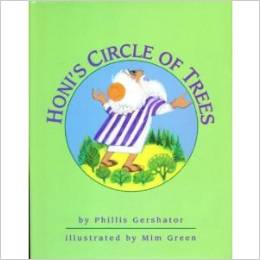 Jiffy-quick synopsis of the Honi / carob story in case you like to paraphrase and don’t have the picture book.

Here’s a neat article about haroov / carob / bokser by Philologos at the Jewish Daily Forward: A Brief on Bokser.

Wikipedia article about the carob tree.

2 responses to “Carob for Tu B’Shevat Show and Tell”