Return of the Jedi Hanukkah menorah, flameless.
Well, the flames are flames—”castle dragon flames,” LEGO part #6126—each snugged into the recessed stud atop a minifig head—but you know what I mean. No actual fire will scorch, melt or ignite LEGO plastic with this menorah. Kids can practice lighting character candles in the correct order, starting with the Frozen-in-Carbonite Han Solo shammash.
Han is hardly a servant archetype (shammash means servant), but he is by far the tallest Star Wars minifig my kid and I could scrounge from the bins of hand-me-downs. (R2, in contrast, is programmed to serve and would be a natural shammash, as he is in my PEZ Star Wars Menorah.)

I am put in mind of two popular Star Wars / Hanukkah mashups I love. One I love enough to wear on my person. Guess which: 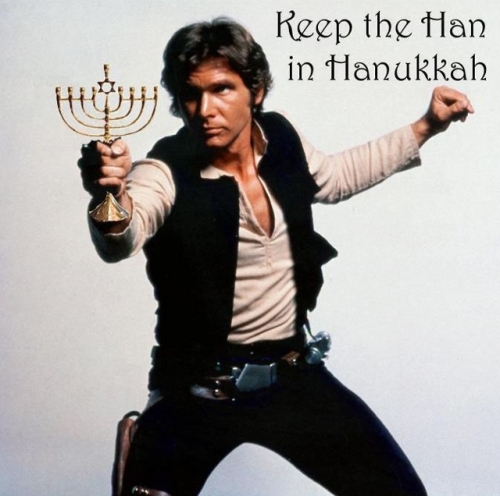 The original link to the printable R2D2 “Droidel” at StarWars.com is kaput, but the creator, Bonnie Burton, keeps a link at her website, here. It is one among many marvels in her fabulous Star Wars Craft Book. Perfectionist Warning: the Droidel is gorgeous, but it is not the easiest thing for kids to put together.

NOTES:
*The story of Hanukkah isn’t in the Jewish canon. See my post about the Elephant Warrior Oil Menorah (w/ Bonus Martyr)—a story taken from the Book of Maccabees—for more info.

And, even though the “other” three Star Wars movies are indisputably in the Star Wars canon, I dispute the assertion.