A hanukkah menorah made out of a repurposed V8 distributor cap might not be kosher, I’ll admit.  But it sure is cute, and if you live with a car freak, satisfyingly thematic.  The function of a distributor cap is all about fire—or at least sparks: it’s part of the ignition system and it helps distribute or control the path of the current.

And Hanukkah is all about fire, right?  The miraculous distribution of that wee bit of fuel?

I chose a V8 (eight cylinder engine) distributor cap because it has 9 holes, and I chose this one because the central hole was higher than rest.  A circular menorah is a no-no——we must see a straight line  of flames, says the Talmud, lest we miscount them or lest our neighbors imagine a pagan conflagration suited for Mt. Carmel and the minions of Ba’al——but at least my shammash candleholder is positioned in a manner that distinguishes it from the others. 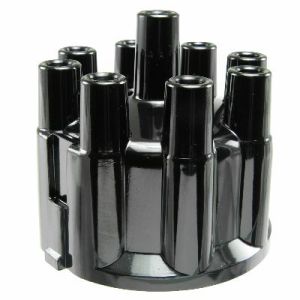 I do not live with a car freak now, but I grew up with one.  My dad had three garages, a carport and a driveway filled with both vintage Studebakers and assorted British and American makes and models.  I saw engine bits scattered here and yon, including distributor caps, and since the caps had to be replaced periodically, some of the damaged ones got pressed into workbench service as upright storage for grease pencils and screwdrivers.  Like a tool candelabra.  Naturally, in my head, I saw nine candles.  But not at the time.  The distributor cap/hanukkah candle epiphany didn’t ignite till decades later.  Till now.

So, this trayfe (not kosher) menorah is a tribute to my Dad, long gone, who himself was trayfe.  He was a Knoxville boy, born and bred, an elder in the neighborhood Presbyterian church and probably never saw a menorah in his life till he saw mine.  Wish he could see this one.

The toy car posing with my hanukkiyah is a 1951 Studebaker Commander: the “bullet-nose.”  My favorite, whether mini or life-sized.

This entry was posted in Hanukkah, Kitsch and tagged menorah. Bookmark the permalink.