Too Santa: a letter from my Jewish Kid 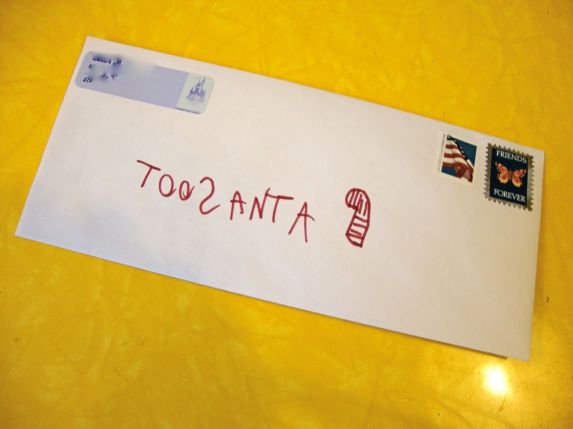 My nearly-five-year-old knows how to address an envelope, where to put the return address sticker and where to put a stamp.

What I didn’t realize was that he intended to put these skills into practice with a letter: “Too Santa.”

How does he even know from writing a letter to Santa?  I’m guessing the concept has been tossed around in his classroom, where he is one of only two Jewish kids.  He sure didn’t hear about it at home, via conversation or television or any other domestic source.  We’d been too busy making menorahs and dreidels to even talk about someone else’s party. (“Someone else’s party” = Christmas.)

The only reason I know he wrote a letter to Santa is because I just happened to notice him reach for the stamps.  I saw the addressee, and miraculously, I kept my mouth shut.  Later on, I asked him what was in the letter.

“It’s not a letter,” he said, “it’s a picture. You know, from the newspaper.”  His grandma was in town, and where there is Grandma there are newspaper circulars.

“What kind of picture?” I asked.

An iPhone: something else, besides Santa, he has never, ever seen.

So he didn’t have the courtesy to write a proper letter of entreaty?  No supplication or polite petition?  He simply submits a visual order form?   What a shanda to the goy of all goyim.  And for an iPhone?  Whose kid is this?  Our family doesn’t even have texting.  Our phones are bricks.

I pondered this for a few days and then asked him why he wanted an iPhone.   “I don’t. It’s for you.”

This entry was posted in Jewish kids in nonJewish school. Bookmark the permalink.

3 responses to “Too Santa: a letter from my Jewish Kid”