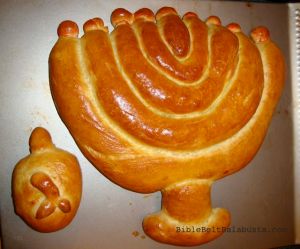 When Hanukkah and Shabbat coincide, the challah deserves a thematic tweak.  The preschooler and I made a big Menorah Challah and a few little Dreidels.

We learned that using food dye to color the “flames” orange is not worth the trouble.  After the challah is baked, the food color merges with the golden egg wash.  But it was fun to try, and now we have orange palms for the rest of the day.

The unattractive dreidels not pictured here were formed freehand.  The nice ones were made by snipping a fat rope of dough with kindergarten scissors.  We shared creative control when it came to forming the letters.  He’s fine with writing dreidel letters on big marshmallows using food-safe markers, but not forming them out of dough this tiny.

Way back when I started baking Jewily, my mother-in-law gave me The Hallah Book: Recipes, History and Traditions, by Freda Reider (Ktav, 1986).  It had groovy shapes for every holiday and occasion: bird, hamsah, ladder, etrog, menorah and so on.  I got rid of it in a fit of de-cluttering years ago, but having a little kid underfoot again makes me want it back.  I’ve just ordered a used copy from a second-hand shop.

I know I can find all that stuff online nowadays, but I love having a real book in hand, especially a no-frills, low-budget, earnest tome such as this one.  And the fact that it connects the rapidly-decaying me with the pre-parent me is a bonus.  A bridge of baking.

For most challah, including the Menorah and Dreidel versions, I use Joan Nathan’s kid-friendly challah recipe in The Children’s Jewish Holiday Kitchen, but with Rapid Rise yeast.  Rapid Rise is the difference between me making the time to bake challah and me not.

Kveller has a Menorah Challah courtesy of Meredith Jacobs.

If you have a link to a Menorah Challah, holler and I’ll add it.

This entry was posted in Edible Craft, Hanukkah and tagged challah, dreidel, menorah. Bookmark the permalink.