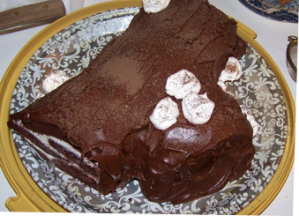 YULE LOG
Yes, during Hanukkah I made a Buche de Noel for the Teenager’s French class party. And really, it isn’t much different from the Jewish Jelly Roll tradition. Except, Jewish Jelly Rolls don’t pretend to be Christmas logs…
I am especially proud of the meringue mushrooms, oui?

After 8 days and nights, the Toddler never did figure out gelt was edible. He hoarded it, stacked it, skated on it, and shoved it behind books in every reachable bookcase, but he never realized what was beneath that shiny foil. (The dog did, however, and it is for times like this that I buy paper towels. Up came the foil, the chocolate, and other things one doesn’t like to see puddled on the kitchen floor.)

Speaking of gelt, we had a gelt shortage. No surprise in Nashville really, but annoying. Plenty of dreidels, plenty of candles, but no gelt. Had I been more proactive, I would have simply gone into the synagogue gift shop while picking up my kid any Sunday in November, and no doubt have been greeted by boxes of my favorite: silver-wrapped dark chocolate coins from Elite. Kosher pareve, and made in Israel (or Izruhl, as they say around here). But I was not proactive. I sent my husband to the grocery store about a week before Hanukkah, and he came back with what I thought, at first glance, were non-kosher discs imprinted with images of Eisenhower and Queen Elizabeth. They turned out to be kosher, made-in-Izrhul, multi-nation coins (including shekels), and they turned out to be the only gelt we were able to buy. Luckily, the family went to a Latke dinner (I had a migraine and stayed home with the blue LED party lights turned OFF), and they came back with handfuls of the good gelt: silver Elite. Yum. The Teenager had to eat it in private, because I figured if we’d made it that far without Toddler catching on, we could make it ‘till 2010. Anticipating this inevitable epiphany, I will be sure to procure plenty of Elite well ahead of time.