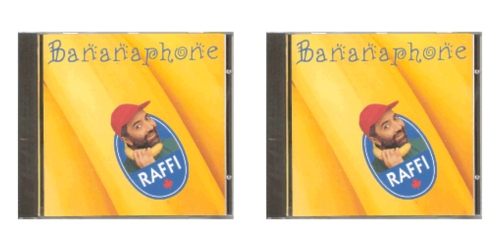 Do you know about Raffi’s Holocaust song?  No one else seems to, either.  If Raffi knows, he’s not telling.

“The Changing Garden of Mr. Bell.”  You’ve probably heard it.  It’s gorgeous.   I found a YouTube clip of the whole thing (which might be illegal?), and I’ve typed the lyrics below.

Raffi didn’t write “The Changing Garden of Mr. Bell.”  Janice Hubbard and Michael Silversher co-wrote it for an album by Parachute Express: Happy to Be Here (1991), and Raffi recorded a different arrangement on the humongously successful Bananaphone (1994).  Millions of kids and parents have heard the song.  But how many of us have really heard it?

As I said, it’s gorgeous.  That’s enough, right there.  It’s a song about an old man with a garden, as seen through the eyes of a kid next door.  It’s the “through the eyes of” element that makes the song so subtle.  The child sees and does not understand.  What’s to understand?  A lot, or a little. It depends, and it can work either way.  But, because yesterday was Yom Hashoah, a day to remember and to teach about the Holocaust, I thought I’d mention the “a lot.”

For my own part, I do not know when and how to introduce kids to what happened during the Shoah.  I am not urging anyone to present this song to a child in the context of the Holocaust.  I’m just asking you, the grownup, to listen to it in that way.  I’d be doing the songwriters a disservice if I advised adults to beat the simple beauty out of a song by making kids “understand” it before they are old enough.  The genius of “Mr. Bell ” is that it can be understood on multiple levels, and all are beautiful.  My preschooler loves the song and I’m keeping my mouth shut.  My teenager still loves the song—we’ve had the Raffi album since it debuted—and loves it all the more now that she realizes what it is “really” about. More on that in a moment.

For Holocaust education, I posit that the most useful place to use Mr. Bell might be with adults.  Maybe high school, maybe middle grades, but not younger.  To appreciate the power of the song, a listener has to be old enough to appreciate the discrepancy between form and intent.  A song about a child, in the voice of a child, marketed to children, but about a Holocaust survivor. . .  Simple, yet complex; sweet, yet chilling.

My teenager is a case in point.  She grew up hearing the song.  When she was about 13, she heard it again, with a new sibling in the house.  That’s when I asked her to listen to the words with me as clues to a deeper story.  Mr. Bell is “foreign.”  He drinks tea instead of coffee.  He grows edelweiss, a plant she knows from The Sound of Music (“it’s an Austrian thing”), and she wondered if Bell wasn’t short for a longer, more “ethnic” name. She agreed that the missing wife and child could have been “lost” in the Holocaust, and that Mr. Bell copes by immersing himself in a “changing garden” full of life—including plants native to wherever  he is from—just outside his lace-curtained window.

Boom.  Suddenly, the beautiful song, thought to be about gardening, is also really, super-duper sad.  Did I ruin it for her?  In a way, yes, but in a way, she appreciates the subtle complexity.  It is sad, but there are notes of hope, life, continuity, attentiveness, stewardship and best of all, there is the  intergenerational relationship between Mr. Bell and the lucky, free-range kid next door.

But, it’s still a song about gardening.  My children’s stellar preschool teacher plays it every year to supplement a gardening unit.  I heard it there a couple of weeks ago and asked if she’d ever considered alternate meanings.  She had no idea the song might be “historical.” When I shared my theory, she did a bit of Googling and sent me a link to a random blog post I’d seen before, a speculation about how Mr. Bell had murdered his family and buried them in the garden.  I admit, that’s funny, if incredibly creepy.  Again, it’s the powerful contrast between form and intent.  It stops being funny when I consider that Mr. Bell’s family “really” was  murdered, but not likely buried in a garden.  More likely in a mass pit or swept away as oven ash.

And is this the real intent?  Is this a song about something “historical?”  The same day I heard “Mr. Bell” at preschool, I got online.  All my previous searches revealed nothing: no mention of the song title with search terms Holocaust or Jewish, no footnote embedded in Holocaust education pdfs, not even a themed customer songlist on Amazon. All I got were a few comments attached to the unofficial YouTube video (see link above), and a 2003 blog post by a law professor, in which he takes the time to type the lyrics and insert his own ponderings in brackets.  He, too, wondered if the family is the “secret” fertilizer in the garden, but at least he referenced the Holocaust.  (Wikipedia tells me the professor has investigated the death of his great uncle, deported by the Nazis.) And, at least both sites indicated that someone, somewhere agreed with me that the song could be about a survivor of the Holocaust.  Small comfort, really. It was time to get to the source: the people who created the song.

I found composer Michael Silversher first, and he replied within moments.  He forwarded our correspondence to his former colleague Janice Hubbard, who also replied quickly.   They were both so gracious, so appreciative, and they both confirmed the subtext of “The Changing Garden of Mr. Bell.”  Hubbard wrote the lyrics.  She says Mr. Bell is “clearly” Jewish, and “his story was not the kind of tale you find in a children’s song, but the metaphor of his changing garden works on many levels. . . .Mr. Bell was (and is) very real to me; it was more like writing a biography than an imaginary story.”  That’s what it sounds like: biography in short, poetic form, open to interpretation.  I get verklempt every time I listen.

Michael Silversher says he’s “gotten so many wonderful comments over the years from all kinds of people,” and it is one of his most favorite songs, “a beautiful collaboration” with Hubbard, “who had the story in her heart.”

Silversher also told me that the first incarnation of the song—before Raffi’s famous one—with Silversher’s arrangement and Hubbard’s vocals, is worth seeking out.  I found it on iTunes and bought the single, and he is right. It’s fun to contrast and compare.  Hubbard’s bright voice changes the melody here and there, and has a storytelling quality that makes the vignette seem more immediate.  The musical texture takes the “changing” nature of the garden literally and changes all over the place after the last verse: in tempo, dynamics, color, harmony, and leaves listeners with a soft resolution and twinkling hope.  Raffi’s postlude is lovely, too, of course.  He’s Raffi.  Do listen.

If this post were a “real” article for a publication, I’d try to interview Raffi about the song, but I leave such efforts for someone else to pursue.  My guess is that Raffi understood the subtext, but wisely chose to present it without comment, to let listeners listen however they listen.  Raffi is all about “honoring the child.”  I believe this is how the song is presented by its makers on the first version, and how the song should continue to be presented to children.  Commentary can come later, as with Torah stories.  Stories first, commentary later. For us grownups, however, I believe the song bears a good, close reading.

How would I use it in a classroom?  My idea would be to play the song first, with no pre-lesson, and then ask the listeners to describe what they heard.  A second hearing with the lyrics visible can further class speculation and discussion.  Desired outcomes and objectives?  I haven’t gotten that far, yet.

Here are the lyrics, which do fine speaking for themselves.  Find both versions of the song on iTunes or Amazon mp3s.

“The Changing Garden of Mr. Bell”
(by Janice Hubbard and Michel Silversher)

Mr. Bell’s from a foreign place, his family all were farmers
He arrived from across the sea, and came to be next door
And he works his land,
With a knowing hand,
Though it’s very small, he makes it grow so well
In the changing garden of Mr. Bell.

These are astors and edelweiss, and rows and rows of roses
Those are hives in the dogwood trees, for bees to come and go
It’s a wondrous sight,
In the morning light,
And the earth is full, every color, every smell
In the changing garden of Mr. Bell

I once saw a photograph, upon his mantle shelf
Of a beautiful lady, a child in her arms
And the young Mr. Bell himself
I wondered out loud about them,
And he answered in the strangest way,
He just said, “Look, see how the garden grows,
It’s always changing every day.”

Mr. Bell has his morning tea, and I will bring his paper
See the sun through the curtain lace dapple his face and hands
Every day is new,
There is much to do,
Life’s a mystery, full of secrets that might tell
In the changing garden of Mr. Bell.

This entry was posted in Jewish Identity and tagged Holocaust, Yom Hashoah. Bookmark the permalink.