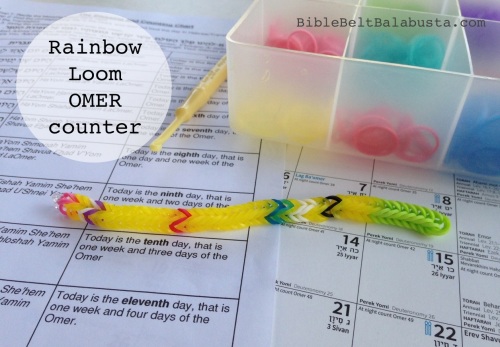 I made this today just to feel what it would be like to count the omer via Rainbow Loom. It felt fiddly, but worthwhile. Mindful. I had to pay attention and I had to make decisions about color coding. Some kids will like this, some kids will flee in the opposite direction. My own child preferred to watch Pokemon rather than experiment with me, but hey, Pokemon.

My methodology was to match the days of the Omer to assigned colors. You could get all Kabbalah and go sefirot colors if that’s how you roll. Or just make each group of seven a different random color, which still reinforces the idea of Seven Weeks (Shavuot means weeks), and which makes the teeny bands easier to count.

I rolled according to my nerdy USCJ calendar:

Green for the days of Pesach (8 because we are Conservative)
Yellow for the barley-colored regular omer days
Black for Yom HaShoah
Glow in the Dark for Rosh Chodesh (because you need the light, get it?)
Turquoise for Yom HaZikaron
Royal blue for Yom HaAtzma’ut
Red for Lag Ba’Omer (fire!)
Purple for Yom Yerushalayim (I wanted Shiny Gold. Is that a thing?)
Pink for erev Shavuot (because that’s the only color I had left)

I used materials my kid left me in our Rainbow Loom bin, which meant that my colors were somewhat limited. 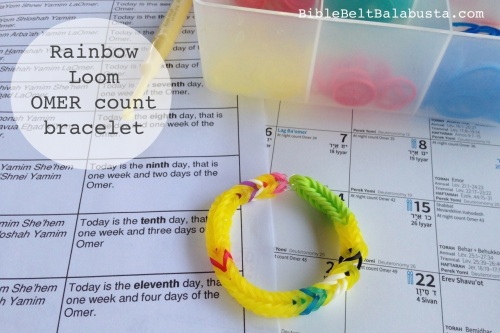 Speaking of limited, you know you don’t have to buy a $20 name-brand loom to make these fishtail patterns, right? All you need is two pegs. Poke 2 tall thumbtacks in a wine cork and you’ve got yourself a loom for free.

WHY
As an enrichment for teaching about counting the omer. A kid has to pay attention to the calendar, think about the nature of the intervening days—what is Rosh Chodesh? What is the difference between Yom HaAtzmaut and Yom Yerushalayim? etc.—and deal with stretchy little bands.
Honestly, the value of this project is in the making more than the using, although people with better eyesight than I might find it a fun counting tool.
By the way, my counter runs right to left. If this will freak out your learner, start at the end so the counter reads left to right, English fashion.

HOW
For a class, I’d have copies of a Jewish calendar and a copy of an omer chart, and scratch paper on hand. Graph paper might be even better. Kids can map out the design and plan for colors before actually building the bracelet. (Part of the educational piece is letting them figure out which color represents what and why.)

Kids who refuse to wear bracelets can just keep the piece straight. Attach an O ring or zip tie or carabiner clip or other acceptable bit of hardware to each end.

By the way, the finished piece makes a good conversation starter when someone asks about the odd color sequence.

I made this on a sudden impulse today, while thinking about beaded omer counters. Didn’t see any examples or references online, so this might be the first? Let me know if you try or modify a rubber band omer counter.

New to Rainbow Loom? We found this charming little video last year, made by a girl named Ashley whose mom hollers for her off-camera halfway through. Seriously, we learned how to make fishtail patterns from Ashley in about 2 minutes. We love Ashley.

Some 2-thumbtacks-in-a-cork loom examples are from MayaMade and this quickie video from RubberBandBracelet.net. BFranklin Crafts show how to make a loom with a block of wood and two nails.
Or, try it without a loom (at Dan’s Crafts and Things), but fingers-only is very, very fiddly for kids.