Pigs in a Breastplate (parsha or Torah project)

When my husband brought home the wrong brand of kosher pigs-in-a-blanket, I opened the box, slid the frozen contents onto the formica, and nearly plotzed.

It doesn’t take much, I can hear you thinking.

But truly, look at the plastic tray. Albeit designed to keep mini franks from merging into one giant maxi frank, it is an instant and entirely unintentional Torah scroll / priestly breastplate. An accidental choshen.

Bear with me, because this idea—this convergence of shape, brand-name and my mishugas—just might come in handy for a parsha activity or sefer Torah work. Whether you think the upcycle ridiculous or sublime, no one can argue it isn’t a fabulous coincidence.

BRAND NAME: The trademarked name of the franks under discussion is Cohen. Meanwhile, Cohen is the modern form of Kohain /כֹּהֵן/, Hebrew for priest, a.k.a. the high priest of the Temple for whom the Exodus breastplate—the choshen—was Divinely mandated.

Nowadays, we still have Cohens and we still have breastplates, but no priests. After the destruction of the Temple, the priestly garments—robe, crown, etc.—were transposed as dressings for the Torah scroll itself, and the gem-studded breastplate became the choshen for a properly attired sefer Torah.

parts of a Sefer Torah (my poster for the classroom)

Nowadays, we also have Cohen’s mini franks and, even better, the tray. With no recycle number indicated, the used tray is trash. Cohen trash becomes Kohain treasure with my repurpose.

instant breastplate, right out of the box. Minus the weenies. Plus the gems.

USE:
The instant Torah breastplate can be used in conjunction with a parsha activity (Parshat Tetzaveh or Tzav) or with a units on the Mishkan, the Temple, or on modern-day Torah scroll ornaments.

HOW:
Instant: use tray as is. Not pretty, but serviceable.
Almost instant: decorate the tray. The flimsy, clear plastic can take spray paint (adults) or decoupage (kids). Wash the grease off, first.
I suggest students read (or be read to) the choshen descriptions in Exodus 28 and figure out a way to mimic the materials and colors of the priestly plate. Or, if studying Torah scroll ornaments, kids can view real sefer Torah breastplates (in the Ark or online) as a prelude to making their own. 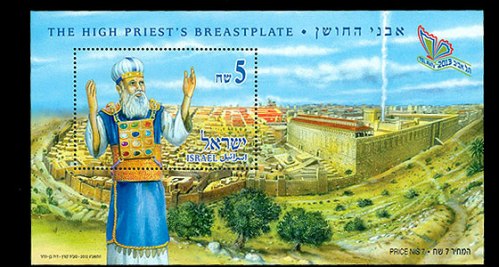 GEMS: The gems can be real stones like my example—and kids love to fondle and sort real stones—or blobs of clay, playdough, marbles, flat marbles, tiles and so on. Students could wad up colored tissue / crepe paper to make lightweight gems, too.
Edible versions: jelly beans, blobs of laffy taffy (OU kosher!), or those chocolate candies that look like rocks (even though I think they only come in only 6 different rocky colors). Let me know if you come up with something marvy.

Wondering which stones we need? Note that the two Exodus descriptions (28:17-12 and 39:10-13) agree as to exact stones within a single translation—I use JPS—but different translations posit different stones. For example, a page of parallel translations lists the first stone as a carnelian, ruby, red quartz, or various forms of sardius, whatever that is. It’s a mess, actually. But, an educational mess. The complexities of identifying the gems could be an early lesson in biblical exegesis—just a heads-up that interpretation exists—even for PreK. I’m serious.
A colorful picture book of gemstones is handy to have on hand, and I doubt most kids will have seen one before.

Keep the breastplate on a flat surface so kids can experiment with stones and placement as per the verses. Children usually love to sort. It’s like therapy.

HANG IT:
When time to hang the choshen, glue the stones with adhesive that promises to attach your material to slick plastic. Low temp hot glue should work for nearly anything.

To hang the breastplate from a toy Torah or a costumed kid Kohain, use a hole punch at the top of each side and string a length of yarn to make a loop. Beaded chain looks great and is cheap by the foot at a hardware store. Gold or silver elastic would look good, too.

NOTES:
*The modern equivalents for the stones are still up for interpretation. Here’s a page from the Jewish Encyclopedia that gives a glimpse of the murky situation.

As cocktail weenies go, Hebrew National “Beef Franks in a Blanket” are cuter than Cohen’s, but they only seem to happen in packs of 32, not 12.  Even though a Hebrew National tray won’t make a breastplate, it is ever so useful for sorting and serving beads, die-cut Hebrew letters, LEGO, googly eyes, pompoms, stickers, etc. The plastic is thicker and opaque, and does not tip over as do egg-cartons. I keep a stack at the ready in the bead cupboard.

This entry was posted in Activity, Crafts and tagged parsha, Torah, upcycle. Bookmark the permalink.