Posted on 03/03/2014 | Comments Off on Purim Carnival Alternative, Miztvah-centric 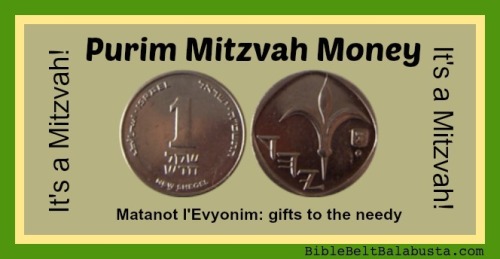 A Purim carnival without cheap, plastic prizes?  What if instead of winning crappy, non-recyclable tchotchkes, a kid at a Purim carnival wins tzedakah tickets—Mitzvah Money—from each game, and then stuffs them into a pushke for his or her favorite charity?  At least two synagogues are doing this already, and this year, mine will, too.
It’s just like Chuck E. Cheese, only instead of redeeming tickets for disposable clutter, kids donate tickets to help people less fortunate.
If the tzedakah-centric model sounds like carnival buzz-kill, read on.

(UPDATE: see pics and after-the-event update at next post, here)

Here’s our plan at shul:
Students win Mitzvah Money (printed in-house) instead of prizes at Purim games and activities.  Students take it to the Tzedakah Tent, where they see three charities advertised by giant pushkes and trifold signage.  Each charity has been adopted by a Middle Grade, who created the signage and who has assigned one student to loiter in a posterboard sandwich sign.
Meanwhile, kids preK through 7th stuff their won Miztvah Money into the tzedakah jar or jars of their choice.
At the end of the event, the scrip is counted by the older students, who then calculate the percentage of 100% each charity has collected.  Then, the real money—tzedakah donations (collected at admission, per family)—are calculated.  The students do the math to figure out how much real money each charity actually collected.  The school office will send the checks. The amount won’t be huge, but it is something as opposed to the nothing that would have been collected otherwise.

The important thing is that every single student, from preschool to 7th grade, must visit the Tzedakah Tent to learn about the tzedakah projects  from the students in charge, and then make a decision about how best to direct their Mitzvah Money. 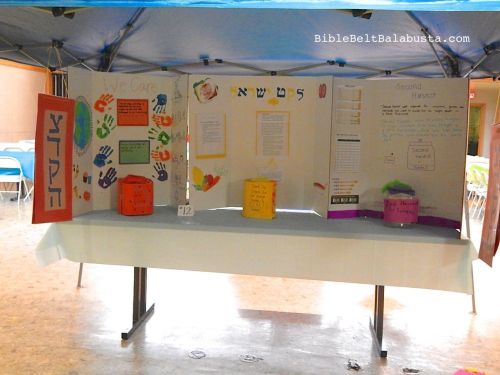 WHERE IT CAME FROM
I got this idea from Rabbi Riqi Kosovske at Congregation Beth Ahava, who got it from the IKAR community in Los Angeles.  Those carnivals are called Purim Justice Fairs, and the collecting station is called a Justice Table.  Justice is a Purim theme, of course, and any attempt to teach kids about trying to address and balance societal inequalities is thematic, too.

The event at my synagogue isn’t big enough to be a fair or a carnival, it’s just a festive Purim morning.  Still, we will bag the Four Mitzvot of Purim together: Hear the Megillah, Send Mishloach Manot, Matanot Levyonim (give gifts to the poor) and Seudah Purim (festive meal).  And, a lot of kids will be exposed to three great tzedakah projects selected, researched and publicized by their peers.

MORE DETAILS
Our 3 tzedakah projects: one of our own synagogue’s social-action groups, one city-wide charity and one Israeli charity.
(A representative from our in-house charity has already met with the students who have adopted that organization.)

By the way, our Tzedakah Tent will be the visual focus of our event.  The tri-fold signs will sit on a table under a tall, blue gazebo hung with posters.  Being the only gazebo in the room will make it easy to direct even very young children (who can’t read) to the Tzedakah Tent.

Pushkes / Tzedakah jars: I use oversized containers that originally held animal crackers (from the Big Box store) or, my favorite, empty UTZ cheese ball jars.  HUGE!  Kids wrap them with colorful info about that particular project.

BUMP UP THE MITZVAH FACTOR with GREEN ACTIVITIES
Riqi’s synagogue has “green” projects like canvas, re-usable lunch bags to decorate and send as Mishloach Manot  (which, as I understand it, was the brainchild of Amy Meltzer).

Our own Mishloach Manot-making will be an up-cycled project using trash and recyclables (think of a small Kleenex box or teabag box, covered, decorated, and with a stapled handle).  No craft foam in sight.

Try my up-cycled crown craft for a booth: turn a cardboard coffee sleeve into crowns or haman hats.

GENERATE MORE MONEY (3 more ideas from Riqi’s synagogue):
Sell Hamantaschen (baked by congregrants) at a booth.   (We can’t do that because of kashrut issues, and we already have a USY hamantaschen fundraiser, but it’s a great idea.)

Sell boxes of mac and cheese to shake as graggers for the Megillah reading, and then add the money to the donations and take the boxes to a food bank.