An upcycled menorah for a dorm room, made of an old yardstick and plastic Easter eggs.  My cost was zero, because I happened to have eggs left over from the seder plate lesson plan wherein I tried to convince 3rd graders that the brightly-colored, hinged and apparently hilarious objects were, in fact, “beitzim”  and not Easter Eggs.  The eggs ended up as projectiles, as talking eggs (what with the handy hinge) and as unintended take-home favors.

Why did I need a LED tealight menorah for a dorm?  My older kid is in college now, far away, and she’s not coming home to Nashville for Hanukkah.  Lucky girl lives in JewLand (NYC, the West Village), so it’s not like she’ll be alone during the Festival of Lights, but I wanted her to have a menorah of her own.  Her dorm forbids “open flames,” which means a traditional menorah is out.  And, although I love some of the ticky tacky electric menorahs, especially the ones with a switch that adds one light each night in the correct direction, I am cheap.  Besides, we all know what happens to dorm crap come the end of Spring Semester: into the dump we go.  So, I need an inexpensive, quickie DIY menorah that I won’t mind never seeing again.

There are other design challenges.  The prototype Dormenorah must also be easy to mail, hog minimum space in a crowded “low cost triple” room shared with two Catholic roommates, be klutzproof (no stand or pedestal), and be attractive enough to inspire a glimmer of impulse to actually use the thing at least once.

I reckon the same attributes could work for a retirement facility, hospital room or anywhere else flames would be illegal or stupid.

Yes, I know an LED menorah isn’t kosher.  I don’t care. If I have to choose between halacha and something actually getting used / done / celebrated / shared, guess which side I’ll pick?  Besides, my girl can just trot down to the Hillel for the real deal.

OTHER FLAMELESS tealight menorah ideas:
Images of tealight menorahs are plentiful online, and wherever there’s a wax version, just substitute battery LED.  The absolute easiest version is a row of 8 LED tealights with a ninth candle propped up on something.  My Handyman Manorah uses nifty PVC fittings that can be glued down or left alone, and is far more interesting (and sturdy) than glass votive holders.  And, there’s always Marmite jars…

MATERIALS:
• 9 battery-powered tealights.  (Pack of three is a buck at Dollar Tree.)
• Old yardstick. These vary in thickness.  Lattice strip (1/4″ thick) works, too.
• Spray paint
• Glue (Goop, E6000, superglue, etc.)
• Little wooden blobs for feet, if you like.  I used 2 clothespin doll stands, but any little block or bit might do.
• If seeing the faint indention of ruler measurements on base will irk you, find some sandpaper to rub them off before you paint.  I rather like them.

HOW TO:
1. Cut or saw a 15″ piece of the yardstick. My goal is to squeeze by with as little effort as possible, so I chose a thin yardstick I could attack with a pair of scissors.  I notice the new Home Depot yardsticks (68 cents here) are thicker than my ancient supply, and would require a moment with a hacksaw.

2. Eggs: Remove the bottom half of 9 eggs. You’ll keep the top of only one, which will become the Shammash.

3. Glue egg bottoms in a row onto the yardstick piece.  Make the sides touch each other for stability.  Glue the one remaining top piece inside the Shammash.  This elevates that candle just enough to distinguish it from the 8.

4. Glue two feet on the bottom on the yardstick bit.  Not on the very end. Line them up with the bottom center of eggs #2 and #8.  More stable that way.

5. Spray paint everything. Dry. Repeat until all the nooks and crannies are colored.  If your dorm-dweller likes sparkly, now’s the time to spray it with a glitter coat.  My dorm-dweller despises sparkle.

6. Put LED tealights in each holder and try it out.  Gorgeous!  Cheap!  Clever!  Now put the tealights in a separate box before you pack the menorah in the mailer, or they will slide around and smoosh and chip.

The Talmud says a menorah belongs in a window, the better to “publicize the miracle,” and my kid’s dorm window is the Talmud’s dream come true.  Hideous room, but glorious window: forty divided lights with a casement in the middle, perfectly situated to publicize anything to all passersby.  This is why she dresses in the closet.  But for a lit menorah, the exposure is ideal, Talmud-wise.  Not that she really cares, and not that I do, either.  But it’s interesting, isn’t it? The Dormenorah will have to vie for space with a big-screen telly, a succulent pot plant from the Chelsea Market, and random college girl detritus, but it should shine just fine.
If she turns it on. 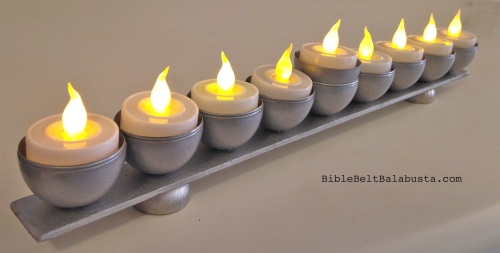 SAFETY FIRST:  This menorah is meant to host LED tealights, not wax/wick tealights.