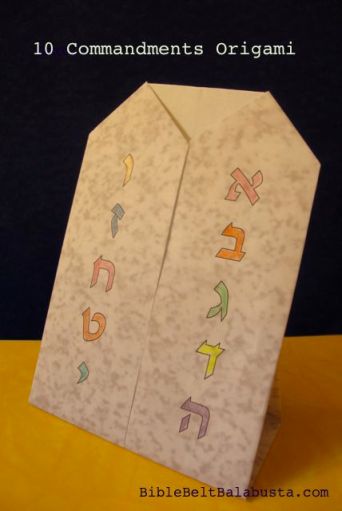 This simple paper-folding craft is a fun way to prepare for and celebrate Shavuot, the holiday that commemorates the giving of the Ten Commandments, and by extension the whole Torah.

With your help, even a young child can fold and decorate the “Tablets.”  The finished product can stand up on a table or lie flat as a card.

The PDF template below has a “granite”  background and two rows of Hebrew letters that will end up in the right place when folded. What’s with the letters? A common visual representation of the Ten Commandments uses the first ten letters of the Hebrew alphabet to symbolize the mitzvot (commandments). There’s a vertical row of five letters on each tablet, each one serving its ancient double-time as a number: aleph for one, bet for two, gimmel for three, and so on.

What exactly are the Ten Commandments? Well, here in the Bible Belt they are yard art (painted limestone, usually) and driveway signage (corrugated fiberglass), but they sure won’t be in Hebrew.
No, really, see this link at MyJewishLearning or take a look at the Suggested Picture Book list below. If you and your child read about the Ten Commandments before you start crafting, you’ll create a more meaningful context.

colored pencils for the letters

Just print the template, fold as directed, and let your child fill the outlined Hebrew letters with colored pencil, crayon or marker. After you fold the first one, you’ll be better able to help your child with the next. Mail one to Bubbie, if you are lucky enough to have a Bubbie. I already sent one to ours, and she, ever the educator, said it needed pictorial representations of each mitzvot. However, I leave it to you to come up with o.5″ icons that convey “do not murder” and so on. My job is done.

Printing hint: To avoid a white border around your granite background, program your printer borderless,  bleed to edge, no page scaling, or customize with zero margins.  If border-avoidance gives you fits, download PDF2, which has letters only (no background).

Feel free to skip the template and let your child draw or rubber-stamp the Hebrew letters. But first, make plain paper look stony by laying it on a flat, textured surface (like a sidewalk or a piece of sandpaper) and do an unwrapped-crayon rubbing.

After you print the PDF template:

1. Lay paper face down, right side up. You are looking at the blank back.

13. Take top point and fold backwards away from you, until white space is even btwn Tablets

14. Fold below letters, away from you

Note to origamists: I avoided using origami terms and definitions for brevity’s sake.

NB: This is a simplified version inspired by an original pattern from Joel Stern’s award-winning book Jewish Holiday Origami.

Read a Shavuot book together before you make the Ten Commandments Origami craft: